The annual EWWR Awards Ceremony took place on 25 June online and revealed the names of the most outstanding awareness-raising actions on waste reduction implemented in November 2019.

Brussels, Belgium – Virginijus Sinkevičius, European Commissioner for Environment, Oceans and Fisheries, Françoise Bonnet, Secretary General at ACR+ and Kata Tüttő, member of the European Committee of the Regions and Deputy Mayor of Budapest, Hungary, opened the ceremony and welcomed the participants to this great celebration of the European Week for Waste Reduction.

For the first time in an online format, the ceremony did not fail to create the usual cheerful atmosphere thanks to the enthusiasm of the participants.

“The EWWR is as topical as ever, because in the EU waste policy prevention is priority number one. In March, the Commission presented a new action plan for the circular economy, aiming to keep resources in the economy for as long as possible. With sustainable products, more waste prevention and high-quality recycling we are boosting the transition to a circular economy”
Virginijus Sinkevičius, European Commissioner for Environment, Oceans and Fisheries

“With the 11th edition of the EWWR, once again we can all be proud of the work accomplished: an ever-increasing number of actions carried out, an unwavering commitment from coordinators, may they be public authorities or not… All this makes the EWWR the largest public awareness campaign aiming at reducing our production of waste and making every single one of us a player in a circular economy and ecological transition.”
Françoise Bonnet, Secretary General at ACR+

"I am very proud to represent the European Committee of the Regions in the European Week for Waste Reduction. The challenge of building a sustainable and climate-neutral Europe for our future generations must also go through the transition to a circular economy, with new waste management practices and awareness raising actions. The award finalists show us that this is something we can only do together, as local and regional authorities, civil society organisations, schools, businesses, but first and foremost as individuals, as every person can really make the difference."
Kata Tüttő, Deputy Mayor of Budapest and Member of the European Committee of the Regions

Six winners were awarded, one in each of the following categories: publication administration and organisation, association/NGO, business/industry, educational establishment, citizens, as well as a European Special Prize for the action that showcased the most marked European spirit.

As a recognition, the winners will shortly receive the EWWR trophies crafted in Malta by the hands of a local artist who works with recycled wood. 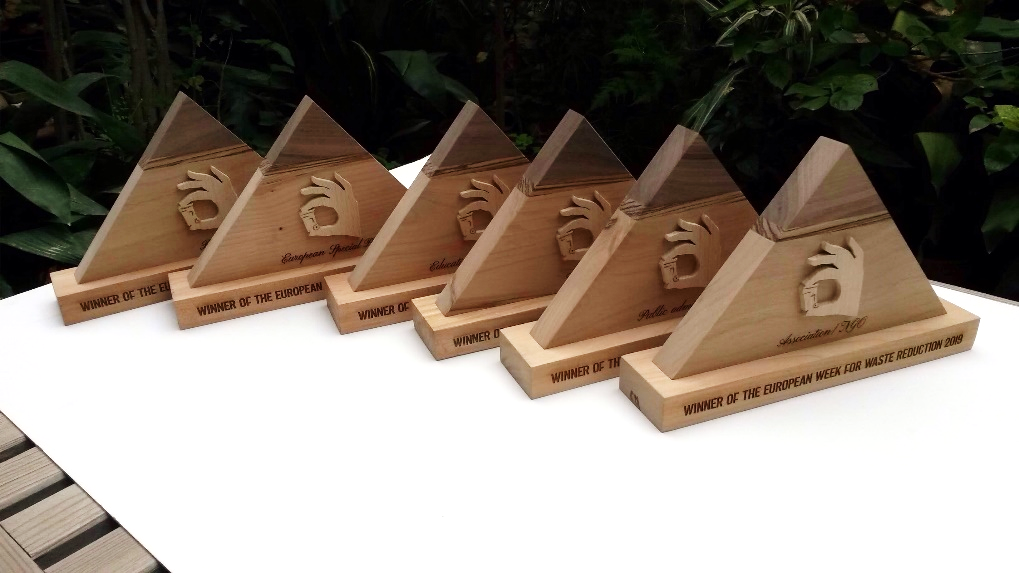 Trophies of the EWWR 2019 Awards - by Atelier Manuel

Out of the 16 finalists pre-selected by the EWWR Jury in March 2019, six actions were awarded during the ceremony. They are:

National awareness campaign “We all participate in waste reduction”, implemented by ERT S.A - the Greek Public Service Broadcasting Corporation in Greece. A nation-wide waste prevention campaign that included, among others, TV shows and spots, radio shows and spots, online promotion, and articles in national publications.

2. Association/NGO category – awarded by Piotr Barczak, EEB
The language of the sea, implemented by the network of language schools ACEIAS-ACEIGA-ACCEI-ACIE in Asturias, Spain. A year-long educational project involving thousands of participating students that learned, inside and outside the classroom, about waste prevention and environmental sustainability by tuning into the language of nature.

3. Business/Industry category – awarded by Clemens Rosenmayr, Eurochambres
Act different, rethink!, implemented by Corporación Alimentaria Peñasanta S.A. (CAPSA) in Asturias, Spain. CAPSA, a nationally recognised dairy company in Spain, overhauled its operations in order to minimise the amount of waste it generates and carried out a broad communication campaign to inform its staff, customers, and suppliers about waste prevention.

5. Citizen(s) category – awarded by Mohammed Chahim, European Parliament
AmbiMapp, your guide to a sustainable lifestyle, implemented by Ambimente in Italy. Grouped under the name Ambimente, some environmentally conscious residents of Treviso launched AmbiMapp, a platform that maps water fountains, eco and repair shops, and other similar venues in the city.

6. European Special Prize category – awarded by Chiel Berends, European Commission
Let's celebrate a zero-waste Christmas, implemented by Saint Josep School in Catalonia and its partner schools in Bulgaria, France, Finland, Italy and Romania. In the framework of an Erasmus+ project on the Sustainable Development Goals, students across Europe worked together to create the story of an elf that goes from country to country to discover what a zero-waste Christmas looks like.

For more information about the EWWR Awards winners and finalists, please have a look at our comprehensive press file.
The video recording of the event will be soon available on the EWWR website.

The EWWR – A key event in waste prevention

In 2019, the number of actions carried out as part of the EWWR reached a record of 16,570. They were registered via 40 national, regional and local coordinators in 30 countries and in cooperation with the EWWR Secretariat. Since 2009, the EWWR’s network of public authorities and stakeholders has been growing and showing its commitment and interest in the field of waste prevention. For its 11th edition, the EWWR put an emphasis on the topic of waste education and communication, under the slogan “Change your ways, reduce your waste”. Many action developers embraced this theme showing how behavioural change is key to prevent waste at the source.

We are now looking forward to the next EWWR edition from 21 to 29 November 2020, which will focus on invisible waste. We warmly invite you to join the EWWR in your region and become an action developer yourself. Who knows, you may become the next EWWR winner!